The Meanings of the 22 Major Arcana Tarot Cards – The High Priestess: 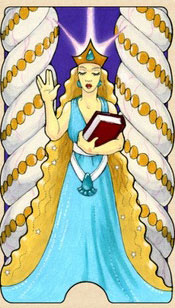 Introduction to The High Priestess

The High Priestess is often depicted as a youngish woman with dark hair in Tarot decks. She is shown sitting on a throne and holds a sealed scroll bearing the letters TORA, which is believed to represent the divine law of the Torah. The High Priestess sits between a white pillar marked “J” and black pillar marked “B”. The white pillar contains the first letter of the word Jachin, which means beginning. Jachin is often called the Pillar of Wisdom and Mercy and is on the right of the High Priestess, as it is in the mystical Tree of Life. The black pillar on her left is marked by the first letter of the word Boaz, the Hebrew word for negation. Boaz is the Pillar of Severity in the Tree of Life. A crescent moon often appears with the High Priestess, usually over her or at her feet and symbolizes growing knowledge and insight.

The High Priestess in a reading denotes a desire for independence and to be free from worldly matters, strong creative abilities, uncanny inner perception, and a thirst for learning. The card upright suggests meanings of authority combined with understanding.

The High Priestess card reversed can imply undeveloped talents, hypocrisy, and fear of commitment. Problems in physical and emotional relationships can also be present in a Tarot spread containing the High Priestess reversed.

The High Priestess in Regards to Love, Sex and Relationships