Personality and Characteristics of the 12 Chinese Astrology Signs – Monkey: 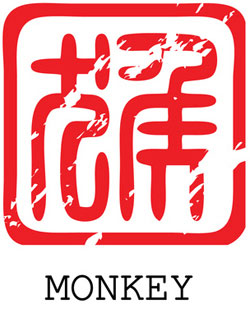 Playful, loving and wise, the Monkey is a wonderful sign for anyone born under it. Monkeys are well known for the clever and sharp minds. They are overtly creative and generous and considered the most talented sign on the zodiac. Monkeys are very social people and thrive on attention for their well-being.

The Monkey wears their emotions on their sleeve, displaying openly how they are feeling to everyone around them. It can almost be grating to those near to them as they constantly express their emotions so openly. In Chinese astrology, the Monkey can also be quite deceptive, hiding true feelings about individuals beneath a mask of charm. They will lead you to believe everything is alright, while telling others that they are unhappy.

Monkeys are great problem solvers and love working out solutions for others. They are somewhat unscrupulous and self-centered and may persuade themselves to believe they are doing the right things while actually doing harm to others. Finally, Monkeys have a passion for food. They love to snack and eat whenever, and wherever they like.

Monkey women are very enthusiastic about sex, approaching it often and openly. The female Monkey requires her lovemaking to be kept exciting or she will get bored quickly. Monkey women are known to become overly infatuated with new partners, becoming utterly engrossed in a new relationship.

Wildly unpredictable, the Monkey woman can cause a great deal of disruption in people’s lives with her frequent mood swings. When properly entertained however the female Monkey can be a very charming and loveable person to be around. It should be noted that she would feel as if it is everyone else’s responsibility to keep her entertained at all times. While the female Monkey will require constant attention, the Monkey woman prefers to be left alone in privacy and isolation for her own personal retreat.

Women born under this sign of the Chinese zodiac generally go against societal norms and feel they have a need to live out an idiosyncratic existence that follows the beat of their own drums. This can cause great difficulties in life, as they do not have a tendency to go with flow of others.

Like his feminine counterpart, the Monkey man is ravenous for sex in all forms. He is an imaginative lover and demands the same from his partners in bed. The male Monkey requires an active mind as well as an active sexual lifestyle and may find it difficult to find a mate that meets his high requirements.

For this reason, the male Monkey is generally unfaithful to even the most well matched partners. He believes that there is always someone better out there and will never attach to long to any one person.

Personality wise the Monkey male is considered by most to be shallow and self-centered, with few friends that call him a close connection. He is known for displaying a lack of self-discipline and will lie to suit his moods. The Monkey man is however, a very generous giver and a cheerfully humorous individual.