The Meanings of the 22 Major Arcana Tarot Cards – Strength: 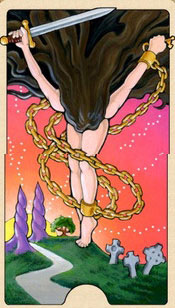 Strength is often depicted in Tarot cards online showing a woman and a lion on the card. The woman has her hands in the lion’s mouth, showing her lack of fear. In many online Tarot decks, she is dressed plainly or in a white robe to denote purity. Roses are in her hair and at her waist, symbolizing the invincible marriage of desires and spiritual strength. The lion appears on the Tarot card as a symbol of strength and as the lion of the zodiac sign of Leo, the ruler of Strength is the planet Sun.

The Strength card has the meaning of the triumph of the spirit over the material. Strength represents those who work with animals, athletes and other people of conviction, Often this Tarot card suggests the meanings of both physical and inner strength. Opportunity and power used wisely are other meanings implied by the Strength card. Strength is one of the birth cards for those born under the zodiac sign of Leo and makes for a secondary birth card for those with the birth card of Key 17 as well.

Strength upright has no negative meanings and positively affects all of the other cards of the deck in Tarot readings. Strength is a card of moral force and of action. When the Strength card appears in Major Arcana Tarot readings before or after the Sun card, the positive aspects of Strength are multiplied. If the Sun card is in its reversed position, this meaning will be weakened. Strength gives the ability to overcome the negative cards of a Tarot deck. When it appears with the Devil card, freedom is able to be attain through sheer willpower along. If the Devil card is also reversed in a Tarot spread near the Strength card, success will be obtained in every sphere of life.

Strength near the Chariot card or the Wheel of Fortune card in Tarot spreads mean purposeful journey is on the horizon. When Strength appears before Judgment card in Major Arcana Tarot readings, great moral character is indicated. If Strength is after the Tower card in a Major Arcana Tarot spread, an event will have surprisingly positive consequences and will be faced with much courage.

Strength reversed often means an illness or a physical setback combined with temporary weakness. Shyness, low self-esteem, depression can be indicated when the Strength card appears reversed in most Tarot readings. This suggests a need to come to terms with one’s inner demons in order to be truly free.

Strength in Regards to Love, Sex and Relationships