The Meanings of the 22 Major Arcana Tarot Cards – Judgement: 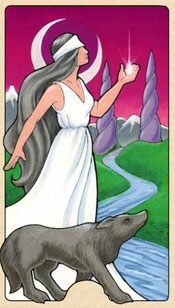 The Judgement card is the key 20 of the Major Arcana in Tarot decks. It is the card of summing up and rebirth. Judgement suggest a reaching of a transformational milestone. It is one of the four elemental cards in the Tarot and represents fire.

Judgement is often show in traditional Tarot card spreads and online by an angel using a trumpet to summon the dead from their graves. Many Tarot decks show three figures emerging from the grave: an old man, a young woman and a figure shown only from the back that could suggest the viewer of the card. They appear in Tarot decks to be praying in meanings that suggest redemption and rebirth. Fire is the elemental ruler of Judgement as its property of transformation is show by the symbolism contained within this card.

Judgement means a transition of some sort. Executioners, members of the Supreme Court and anyone involved can use Judgement as a significator in a Tarot spread or as an adoptive birth card. The meanings of the Judgement card often tend to be a final irreversible decision. This card can mark the end of one stage and the beginning of another. It is the card of resurrection and renewal in matters including love and sex. Judgement is one of the birth cards for anyone born under the zodiac signs of Aries, Leo, or Sagittarius and their associated planets of Mars, the Sun and Jupiter.

The Judgement card upright has all the connotations of a life well spent. It suggests resolution, fulfillment in both love and sex and release and renewal. Judgement is one of the strongest cards of a Tarot deck when it appears in the upright position in a reading.

When Judgement is before the Chariot card in a Tarot spread, it means there will be triumph and fame. If Judgement follows the Chariot, one journey will soon end and another one will commence. If Judgement is before or after the reversed Chariot (rx), both situations will be fleeting and will end in disappointment. When the Hermit card follows Judgement in a Tarot reading, triumph will be achieved but only of a spiritual kind or after death. If the reversed Hermit (rx) appears in a Tarot reading following Judgement, discoveries of great benefit to all will soon be made public.

The Judgement card reversed can mean loss, recurrent problems in love and sex, bitterness and transient success. This card can signify a negative assessment or an unwelcomed transition, particularly when Judgement reversed appears along with upright or reversed Justice in a reading.

The mostly negative influence of Judgement reversed is weakened by proximity to the Devil card, the Wheel of Fortune card or the Chariot card in a Tarot reading. Negative effects are totally negated whenever the reversed Judgement (rx) card appears along with the Star card or the reversed Moon (rx) card in a Tarot reading. Judgement (rx) reversed in a reading before the Emperor or Empress in any orientation means power acquired will be short-lived.

Judgement in Regards to Love, Sex and Relationships

Judgement usually means a final decision has been made in sex, love and relationships. A decision to marry or obtain a divorce is often indicated by Judgement. Facts are faced and it is possible to act decisively on the direction one wishes to take in love and all sexual relationships when the Judgement card appears in a Tarot reading, Acknowledging followed by forgiveness is indicated by the appearance of this card. Judgement signifies an end to a bitter relationship, a new feeling of being free from troubles and a realistic outlook on all matters of sex and love.