The Meanings of the 22 Major Arcana Tarot Cards – The Star: 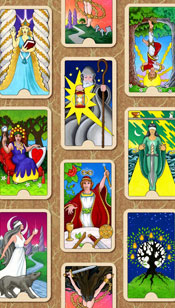 Introduction to The Star

The Star is Key 17 in the Major Arcana in a Tarot deck. It is the card of hope and love. The Star denotes optimism and love of humanity. The zodiac sign of Aquarius and its ruling planet of Uranus rule the Star.

The Star is depicted in many traditional and online Tarot decks with a nude maiden who is kneeling by a pool beneath. She is shown pouring water from two pitchers. The figure’s rule over both cosmic dimensions are often further symbolized in the Star by the maiden having one foot free on dry land and the other foot in the pool of water. A spiraling star is shown above her, symbolizing both rebirth and eternal hope.

The Star in Regards to Love, Sex and Relationships

The Star indicates hope and possibilities in love and sexual relationships. It is a card of friendship and understanding. Relationships, sexual or otherwise hold future hope and promise whenever the Star card appears in a Tarot reading. The Star suggests mutual friendship and firm promises. Insight and guidance from others are also possible when the Star appears in a reading.