The Meanings of the 22 Major Arcana Tarot Cards – The Magician: 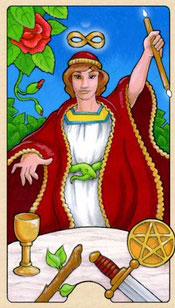 Introduction to The Magician

The Magician is Key 1 of the Major Arcana in the Tarot deck. It is the card of focused energy and mastery of special knowledge. The Magician is most often associated with the planet Mercury and all communication.

In many Tarot decks, the Magician is depicted by a man with dark hair that stands before a table. On the table rests a cup that represents emotions and love, a knife to represent intellect and willpower, a pentacle to symbolize the financial and physical aspects of life, and a rod to represent spiritual matters. In his free right hand, he holds a white wand and there is a lemniscate, the symbol for infinity, atop the Magician’s head. His free left hand points to the ground to make the energy from above manifest itself on Earth through his sheer will alone.

The Magician represents the self-employed, people working in the medical fields, politicians, motivational speakers, online writers, applied scientists, engineers, agents, entrepreneurs and inventors and can be used as an adopted Tarot birth card. The Magician is the birth card for people born under the astrological sign of Gemini and Virgo and represents the number one. The Magician is one of the secondary birth cards for those with the primary birth cards of the Wheel of Fortune and the Sun as well. – See Tarot Birth Card Compatibility

The Magician appearing upright often means that it is time to apply knowledge gleaned from education and experience. All four elements are now free to be utilized. The Magician holds all of the tools of transformation in meanings involving mind and matter.

The Magician reversed can have meanings involving weakness and indecision. Often it indicates a squandering of resources and talents. In some cases, the reversed Magician could be a sibling who is secretly the source of the trouble.

The Magician in Regards to Love, Sex and Relationships

The appearance of the Magician in a Tarot spread usually signifies meanings that a mental picture of what is desired in love and relationships magically can appear and a direct course of action can be set to follow. The Magician can sometimes mean a sudden sexual attraction from a formerly platonic friend. The Magician may also signify a thoroughly deliberate plan to catch the object of one’s desire, as in casting a love or glamor spell on another.